Digitization, innovation and entrepreneurship are among the favorite topics in the election campaign this time. In some cases, promises seem totally in line with European policies to promote digitally driven economies – e-governance, research, promotion of start-ups through various financial instruments, etc. In others, “developing development” appears to be a patch in programs. Significantly differ in terms of quantity and quality also the suggestions – in some there are some specifics of action, other mainly vivid phrases and the rewriting of already almost done measures. Electronic governance is a topic almost for everyone, where specifically, where – not. The same applies to terms such as innovation and entrepreneurship. Interestingly, left-wing parties not only do not lag behind in their promises to business, but on the contrary – in some cases, they are more likely than their counterparts at the other end of the spectrum. Here is a summary of the high-tech ideas of the candidate government:

From the New Republic, they rely mainly on cutting-edge approaches to education, market-oriented research and e-governance . It promises to develop educational software to support the autonomy of schools and teachers to enable learning to take place with the technological means of the 21st century. Funding research will be state policy. The state will finance research of industry interest. Administrative services will become entirely electronic. Electronic governance and unified procurement documentation will be introduced to ensure fair rules and fair competition between participants, the program says.

“Will”: IoT as a national priority

“Will” wants “legislative changes that guarantee investment in fundamental scientific discoveries and developments, experimental laboratories, and in innovative ICT / IoT as national priorities.” This is expressed in grants and investments for startup and scaleup companies, unified registers, a platform that unifies the entire ecosystem. Among the proposals are also a rapid reaction team on the topic innovation through live chat. “Volya” also proclaimed a specialized team for initiating and implementing projects for rapid and massive digitization of basic digital skills, and the most ambitious task was to create a “Ministry of Innovation”.

“Reform Bloc – People’s Voice “: IT for Everyone and Everything

Reform education priorities also include digital skills and entrepreneurship skills. However, it is mainly about the reformers that digitization of public services – from education through electronic textbooks, electronic diaries, online test platforms, etc. through the cultural heritage to the development of e-health by building a national health information system. The administration is also involved in the plans – auditing the information and communication infrastructure of the state administration for the needs of e-government, effective work of the State Agency for e-Government, building an effective electronic system for monitoring the operational programs are priorities of the program. There is also talk of effective and ubiquitous introduction of machine and electronic distance voting, e-justice, a unified information system for counteracting crime, digitization of energy and development of a market for energy services.

DST wants to introduce electronic voting and building a functioning e-government. Among the priorities are the development of a national strategy for investment in new technologies. No more details.

The program envisages the creation of a state bank for fast and cheap lending to small and medium-sized businesses as well as the creation of high-tech parks and a state center for the realization of Bulgarian inventions and patents.

In order to grow the economy by 6% per year, the movement wants to stimulate an export-oriented economy with a focus on innovation and entrepreneurship. Part of the concrete measures are the promotion of student entrepreneurship and the stimulation of Bulgarian scientists. E-administration as a means of greater transparency and better business order is also among the priorities. There is talk of increasing funding for start-ups, including through new incubators and funds to be managed by the European Investment Fund. The program has set up various online and offline communication channels and databases to help businesses unite around common projects, attract staff, and communicate with scientists. In terms of education, there are arrangements for scholarships for students abroad if they return to Bulgaria. It has also been teaching skills such as critical and creative thinking, digital, financial literacy and soft skills. It will stimulate participation in youth projects for science, technology, innovation, art, ecology, volunteering, etc. 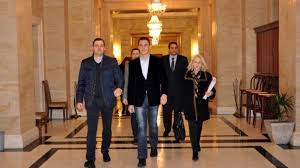 This formation is called to encourage universities to develop innovative ecosystems and create new businesses, and puts emphasis on state procurement in higher education to technical, applied and mathematical specialties. The program provides for a higher share of production of industrial and high-tech goods to provide added value and jobs.

The association wants to create a state fund for innovation and high-tech export production with a start-up capital of BGN 1 billion and aim to attract up to BGN 500 million from the private sector. It will be run by a National Investment Company with professional leadership appointed after an international competition, and when it becomes stable, the state will gradually sell its shares and leave the private business to take full control. Tax incentives are foreseen for companies investing in the qualifications of their employees, in high-tech industries and in underdeveloped regions. The association also promises immediate introduction of a wide range of electronic administrative services and online registers.

The centuries promise a transfer of science, knowledge and capital. Increasing the capital of the Innovation Fund by 150 million leva, with the support of young engineers and specialists, who will start their own companies and develop their own brands, as a key role of BSP seen in BAS and universities. The next step towards improving the environment is easier and more differentiated financing for young companies, modeled on the European Commission – European Venture Capital Funds (EuVECA), and especially the Social Entrepreneurship Funds (EuSEF). There is also a small SME segment on the Bulgarian Stock Exchange whereby a small, fast-growing company without a long history of finance can raise capital through a simplified procedure. Tax incentives for young entrepreneurs, development of development centers and innovation support from the birth of the idea to a finished product on the market are also envisaged. The latest promises are not specific.

The GERB program makes it clear – repeating policies that have already taken place or are underway is not a look into the technological future. Still, the party has committed the state, businesses and banks to continue to gain experience in allocating funds from operational programs that are heavily concentrated in the Fund Fund over the new programming period. There are no specific measures how to improve the environment for innovative products and businesses. But to this end, GERB is committed to completing the work on e-Justice by the end of 2018. In education, the party will stimulate critical and innovative thinking, creativity, analysis and decision making, the use of the Internet and new technologies. It also relies on enhancing entrepreneurship, information technology through training and a national funding program for training companies.

MRF: e-government and other general

MRF promises to finally build e-government. Stimulating the launch of the Fund as a means of facilitating the start-up of small and medium-sized businesses and start-up programs is also recorded in the program. It will also stimulate the full and effective use of the capabilities of the new EU investment instruments, such as the European Strategic Investment Fund. Again, the measures are a brief description of goals without clear action.

What is painting? The paint is a fluid product that after being applied on a surface in thin layers, is

In 1926 Andrei Lyapchev and Atanas Burov took over the leadership of the Bulgarian state Honorable Assembly! There are people