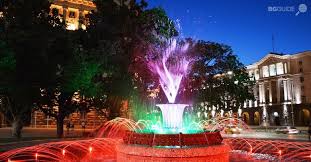 There are people who enjoy glory, honor, fame, due to qualities that attract sympathy, but slowly, time gradually wipes out the memory of them and of them unless they have had some healthier and bigger virtues, there is no memory.

There are other people who do not have brilliant qualities in the sense of attracting crowds and having to do with the masses that have stubbornly struggled, often provoking resentment, bitterness, malignity, and intrigue, and who die at their place unrecognized, invaluable. But we are passing time, creating a perspective, an opportunity for a more accurate assessment, and gradually these big people grow in the eyes of public opinion, grow in the judgments of future generations, grow in the history of their tribe, their people.

Well, the late Andrei Lyapchev, I can certainly say, belongs to this second category. And the more time passes, the more this big figure can be seen in its great outlines, not in the immediate impressions, so to speak, from it, the more it grows. And I am deeply convinced that the time will come – it is not yet come when, after the fall of the passions and the possibility of seeing this figure, its true outlines, in the full perspective of the environment in which it lived, one will come recognition among all in Bulgaria that Andrei Lyapchev is one of the most important figures that Bulgarian political reality has created.

He was above all good, the first feature that characterized him.

He was otherwise Bulgarian – for the good of his heart, he seemed not to be a Bulgarian. He did not know how to hate, he did not know how to avenge, he did not know how to pursue, he had no enemies in his mind. Opponents – yes. A people with whom he has an ideological struggle – yes. But even against those who defamed him, who were cruel, unfair to him, even to them he did not abhor. For me, this is the most characteristic feature and, perhaps, the most valuable human quality that can be possessed. And the late Andrei Lyapchev owned it to the highest degree.

He started as a child as a high school graduate in Plovdiv, a politically violent career, he has done nothing in his life, has not done any other questions, has no other life interests besides this: to serve Bulgarian purposes, on Bulgarian tasks, on Bulgarian interests. And his very death seemed to come to crown this office of service to his country. Dying, semi-conscious, his last word was again for Bulgaria. His last covenant was, “Keep the constitution, help with the rise of Bulgaria in the framework of its laws!” With his eyes, he put them on the image of Bulgaria, thinking of Bulgaria, with the will to his last exhalation to be in favor of the country to which he had devoted his entire life.

A third feature that characterizes it in my eyes

That was the deep organic and mental balance of the whole figure. There was no contradiction in it. He was doing his public service not with grief, not as a duty, not as a burden, but as an inherent in his flesh occupation, which he thought was destined, for which there was no doubt, no contradiction, or whatever hesitant skepticism at any point in his life.

This man, harmoniously created, fully balanced, had an amazing working capacity that neither the advanced years nor the illness nor the moral afflictions nor the Bulgarian malice he could have sneak past or around him could stop, could not diminish. I, as a companion, remember moments when he was getting out of the hospital bed with a temperature of 38-39 degrees, all feverish, coming to the National Assembly to respond to interpellations, to stay there for four hours and to endure, that his feet were trembling.

An apparent contradiction, perhaps, was in this big figure: a seemingly cold, devoid of sentimentality, somehow cruel, crudely inaccessible inside – how to say, in his intimacy, in his soul, he was actually sentimental. But he had the sentimentality of those people who consider the manifestation of sentimentality as a weakness. He sank this deep in his heart. He experienced some pains painfully, but he experienced them with the outside figure of unbridled stiffness, calmness and balance. I have had a chance to see him weeping – not because of personal insults, not because of personal interests, not because of his infamy or his political ambition, but of crying for Bulgaria. This brutish man, this Bulgarian, carved out of a rigid Bulgarian log, had a heart that deeply felt what he was sincerely suffering, but he could hide.

These are, in my opinion, a respectable assembly, the most characteristic features of the late Andrei Lyapchev.

To these peculiarities I have to add: an indescribable love for Bulgaria, an indescribable love for my tribe, and an extremely wide culture, which I would say exclusively to the public service, but which deals with all those areas that need to be possessed in order to can a public figure in today put the times that cause such serious problems to be on the level of understanding and solving these problems. This man, who had studied at many universities who knew several languages ​​who had a personal experience of 40 years of political activity, was still learning until the last moment of his life, and by the last moment of his life he was reading – and reading only serious books and journals on matters affecting fate – political, economic and social, the world, large and small states, all of humanity. He kept on constantly, like a few of us younger, on all the new formulas, on all new research, on all new thoughts on the social problems of modern times. Always armed, always prepared, with a phenomenal memory that allowed him to find an answer in each case, to find for himself a solution that he did not always say at once, but which he often left behind on a second plan to be prepared gradually so that he would not immediately instigate a rebellion, and thus be thwarted by his pursuit, with a strong and persistent will, sooner or later, on the roads, if not on the right path, he would come to the passing of the decisions he had found.

He was always at the height of the situation:

A spirit always keen and awake not only on the theoretical problems but also on the most concrete issues that Bulgaria’s life created. As a minister, or as a leader of the opposition, he was always ready for every question to formulate a definite opinion, which was the seal of goodwill, competence and seriousness. He did not pay a tax on demagogy. He had the moral courage to advocate often unaccustomed theses – people, public opinion, who do not like the street, if you want, Sofia. He had this courage to remain alone sometimes to wait for the time and the enlightened judgment to give him the right to temporal enthusiasm of one or the other.

Figure original, powerful, comprehensive, deeply moral and totally social. She has disappeared, and you all, friends and admirers of the late or his political opponents, feel that her place is still empty today. And this emptiness, hard for his family, hard for his relatives, is even worse for the Bulgarian people, for the Bulgarian state, especially in times like today, where strong personalities are dedicated to their country, clearly seeing, really judging , able to find solutions even for the most complex problems.

Today, six months after his death, we bow once more to his bright memory. Let us continue to be excited by his example and let us wish to Bulgaria in the future to give birth to such sons.

What is painting? The paint is a fluid product that after being applied on a surface in thin layers, is

Digitization, innovation and entrepreneurship are among the favorite topics in the election campaign this time. In some cases, promises seem